Next time you look around your house or apartment, take a look at some electronic items you no longer use, such as that old iPhone 4, that older model iPad or that VCR you let gather dust. The problem Australian’s have, is a massive amount of electronic items sitting in our homes. If not disposed of properly leads to electronic waste going to landfills and damaging our environment. Colosoul explores the ongoing and increasing issue of e-waste in Australia.

E-Waste is any electronic equipment that is no longer used including computers, mobile phones, televisions and fax machines, etc.  This waste may be donated or sold for re-use, recycled, or disposed of ending up in landfill. Australia is one of the top ten global consumers with over 17 million computers, televisions and other electronic products thrown away and only a tiny 4% of this e-waste is recycled as of 2008 statistics. To date, an alarming approximate 37 million computers, 56 million mobile phones and over 17 million TV’s have gone to landfill in Australia. Given our consumerist lifestyles, companies superseding products with new models and Australia’s habitual uptake of new technology means this problem is getting worse.

Once e-waste hits landfill many adverse environmental effects occur due to the materials and components of e-waste. Many different metals, chemicals and plastics such as lead, cadmium, mercury and gold end up in landfill straining the natural environment with toxins, which can pose a risk to humans and animals. Queensland University’s National Research Centre for Environmental Toxicology released a recent study showing the prevalence of these chemicals are already everywhere in Australia’s environment and people. What is of concern is that children under four years of age were showing the highest levels of blood contamination.

The problem is also economic, gold and copper are very valuable and worth a significant amount. It is also cheaper to extract gold from mobile phones for example than from a ton of gold ore. If instead we recycled our e-waste, not only would toxic substances not go into the environment, we would save money by not having to construct new mines to mine resources that can be recovered from e-waste. This helps reduce greenhouse emissions and minimises chemical pollution, erosion and contamination of water.

So what can be done about the massive e-waste problem? Tech Collect, funded by Australia’s largest technology companies such as Dell, Toshiba and Canon is a free national recycling service where consumers can drop their computers, accessories and TV’s for free at dedicated collection points. It was developed in response to Federal Government passing the Product Stewardship Act in 2011, which legislated that both government and industry have a shared response to reduce electronic waste and increase recycling rates. 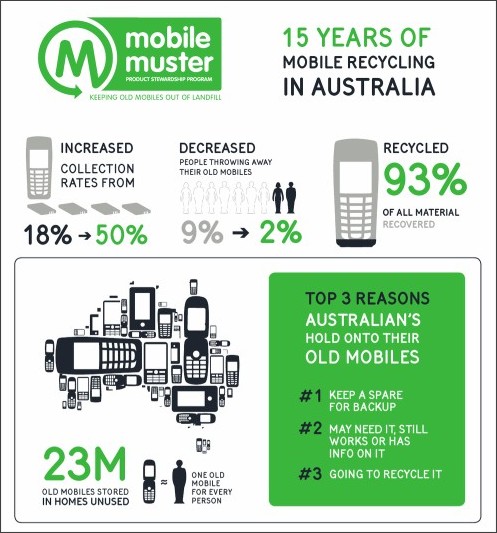 Mobile Muster is another important organisation in the campaign against e-waste. It is the Australian mobile phone industry’s official product stewardship program and is a government accredited, not for profit mobile phone recycling program accepting all types of phones. Given the growing rates of smartphone ownership in Australia and the rapid uptake of new models by consumers this is important. Further over 90% of the materials (metals and plastics) used in a mobile are recyclable and can be reused to make new products, Consumers or businesses can return their phones to drop off points for free.

However amidst these schemes there is concern that Australia and other industrialised nations have trafficked e-waste into non-industrial and less regulated countries such as India and China. Possible reasons for this include lower wages for workers to disassemble and recycle e-waste to save companies and the government funds. Unfortunately most of the world’s e-waste ends up in China exacerbating the environmental and pollution problems the country faces. The passing of the Product Stewardship Act in 2011 has spawned several e-waste recycling companies and is a noble start but there is much progress to be made to keep e-waste out of landfill.

What we’re listening to on Spotify